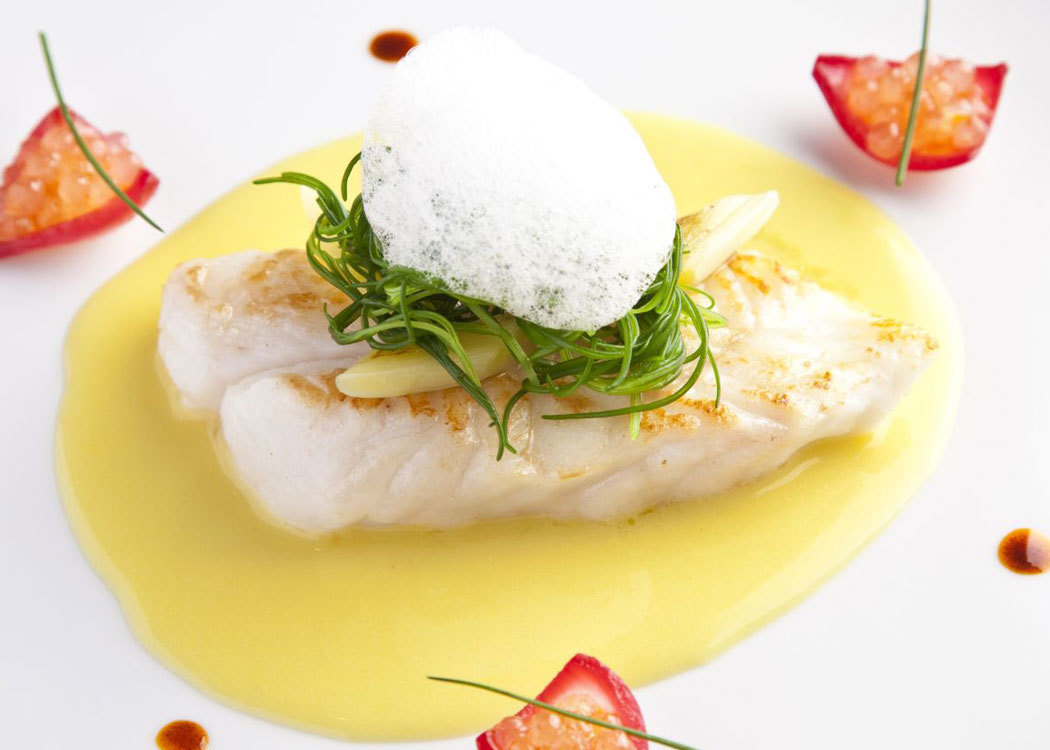 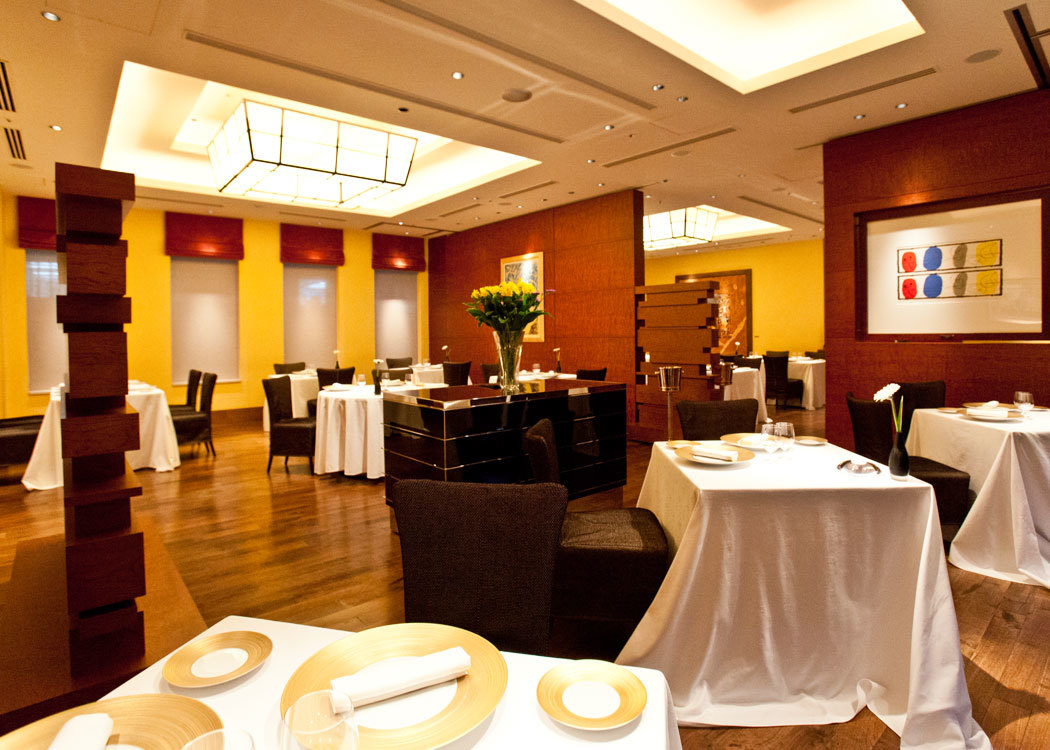 Imaginative dishes based in Catalan tradition.
Bringing the world of Carme Ruscalleda to Nihonbashi. 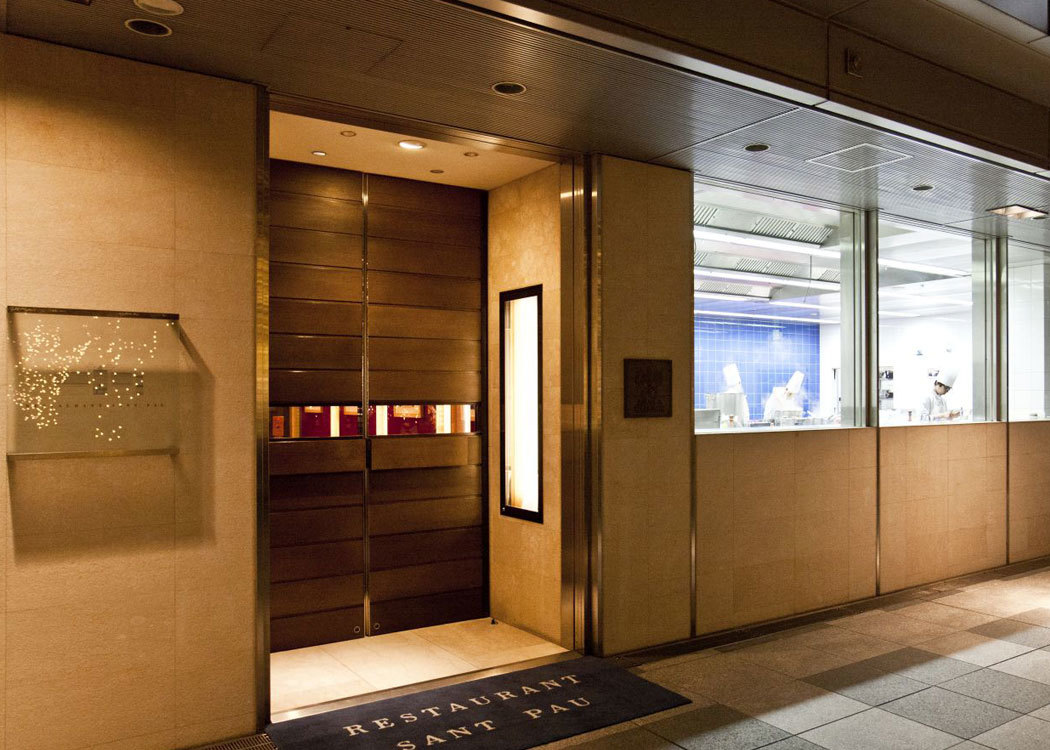 Nostalgic old buildings stand amidst the new cityscape in Nihonbashi, the spiritual heart of modern-day Tokyo.

Slip behind Coledo Nihonbashi, one of the area's landmark buildings, and peek through the glass on the first floor of its Annex building. There you will find a kitchen bursting with life - Restaurant Sant Pau. 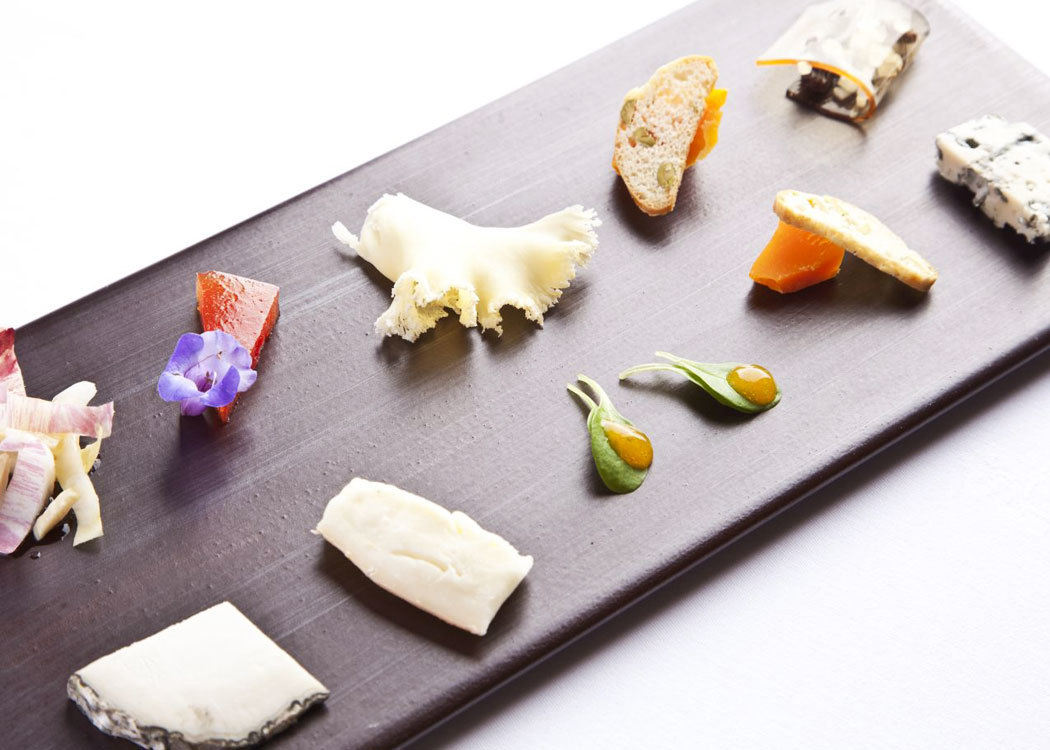 The original restaurant can be found in the small town of San Pol de Mar, 60 km from Barcelona. In 1990, only two and a half years after it opened, it was awarded its first Michelin star.

Sant Pau's chef Carme Ruscalleda didn't start in such work - she was originally a simple housewife, and this fact gathered great attention. By 1996 she had earned her second star, by 2006 her third, and now her restaurant is renowned worldwide. 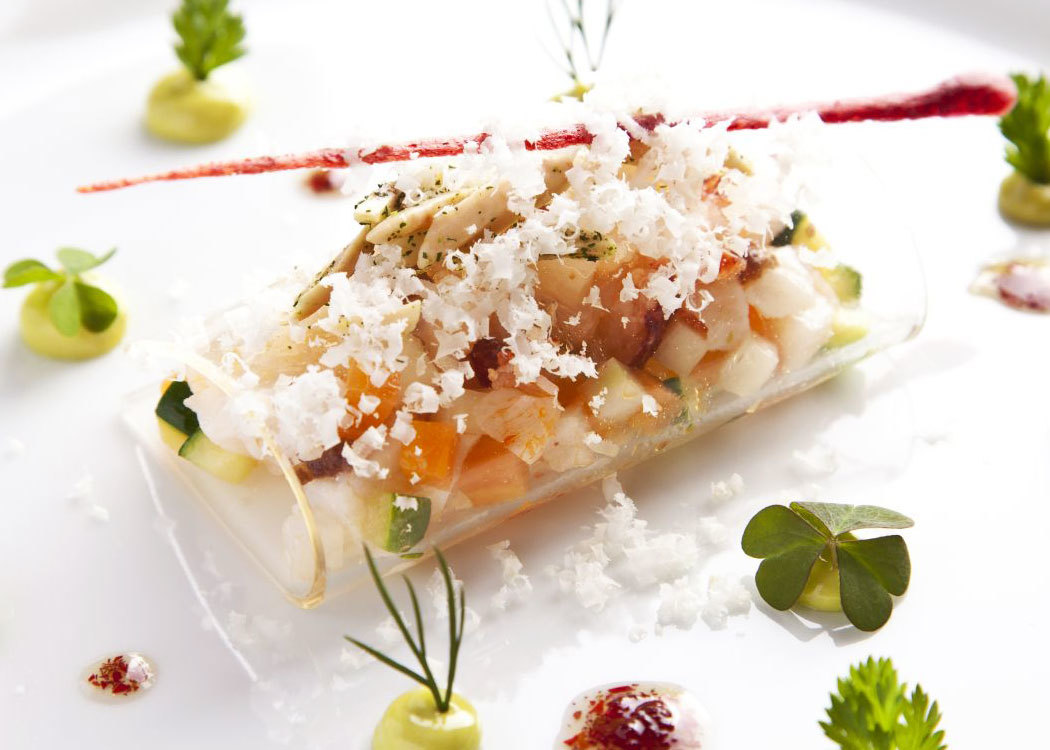 Ruscalleda opened her Tokyo location in Nihonbashi in March, 2004. The cuisine on offer is based in the Catalan food she was raised on, but modified so imaginatively that first-time visitors will likely find that their image of Spanish cuisine becomes completely transformed.

Beautifully transparent jelly is made with seawater to add a touch of salt to the final dish. Decorative herbs that seem to have come straight from the garden are combined with mayonnaise.

Every beautiful dish is given a feminine touch; each incorporates something extra that strikes a resonant chord within the soul to create a moment of pure bliss. 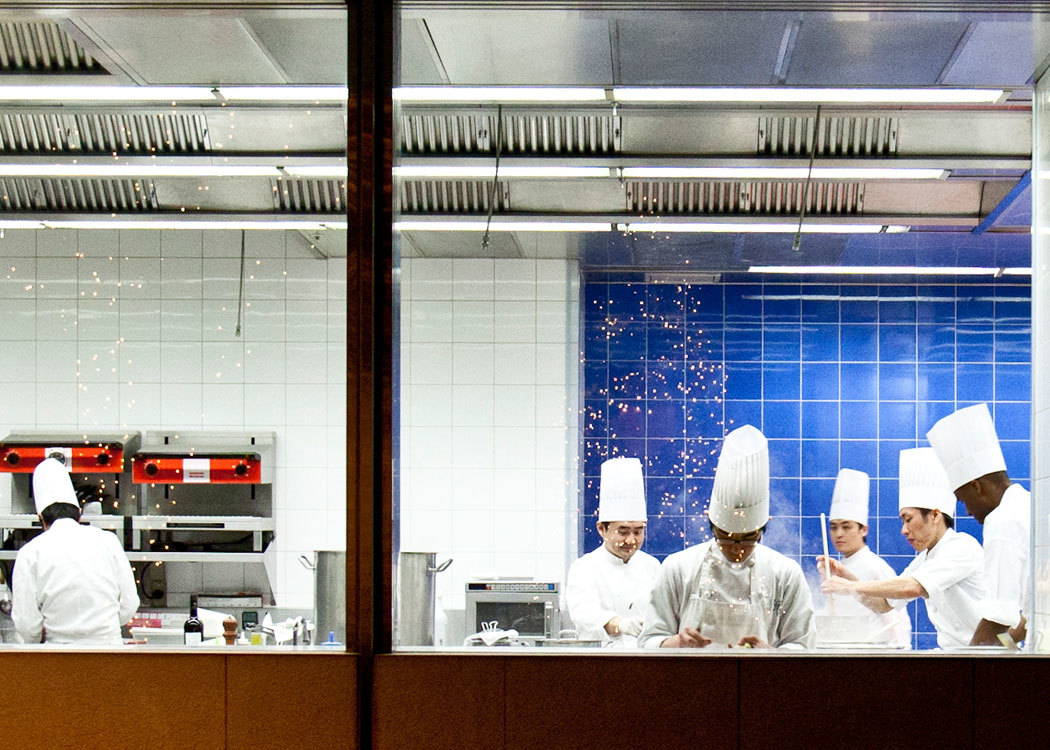 Since its opening ten years ago, it has brought a breath of fresh air to the streets of Nihonbashi, and established itself as a true classic.

It continues the traditions of the home restaurant in San Pol de Mar, but gives them a unique twist using Japanese ingredients and Japanese philosophy.

This is a culinary tale of two towns - Tokyo and San Pol de Mar - both of which are home to the incredible cuisine of Sant Pau. 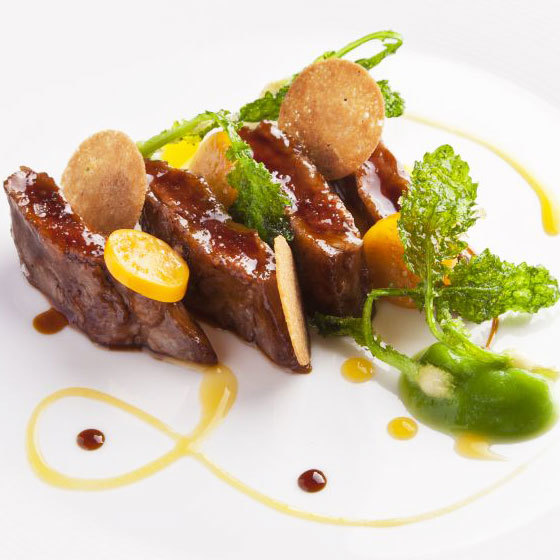 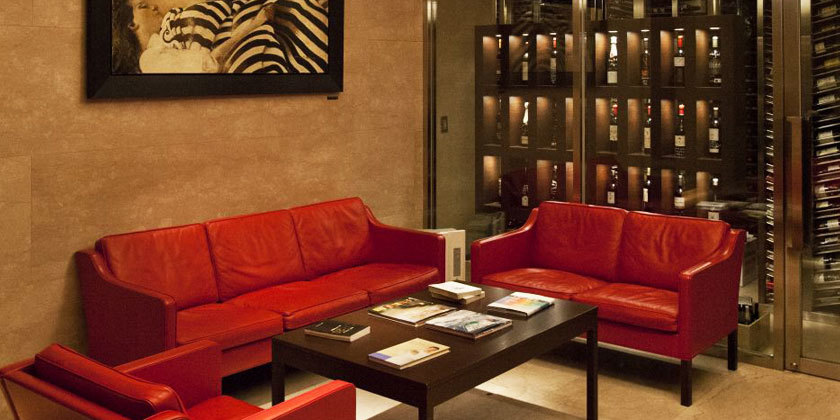 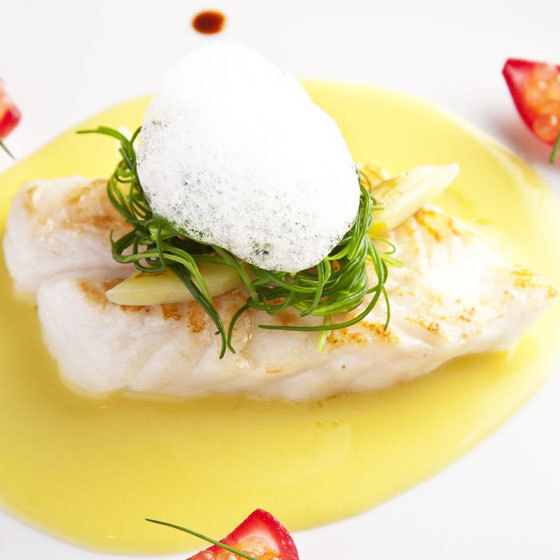 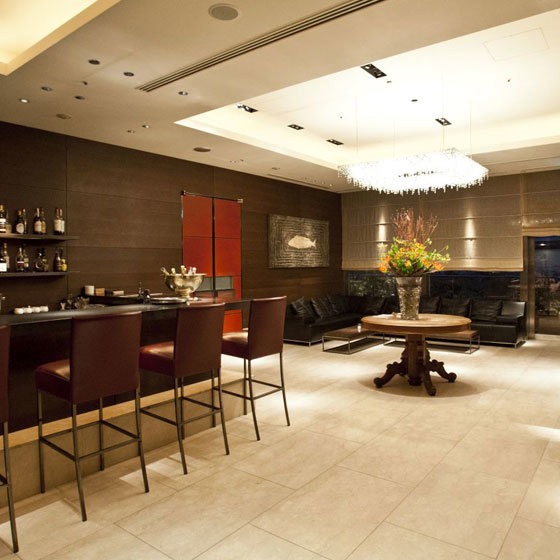 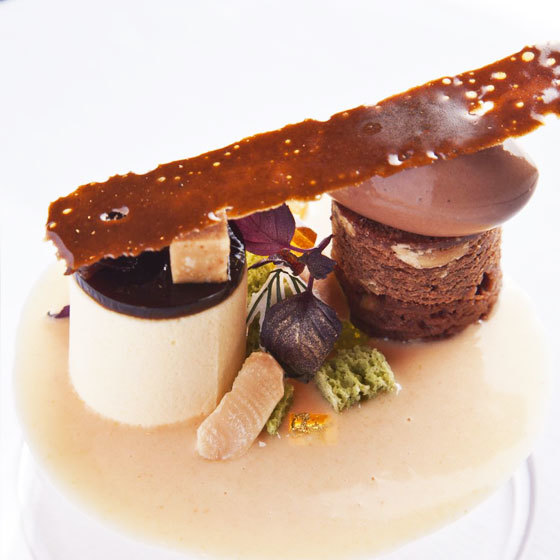 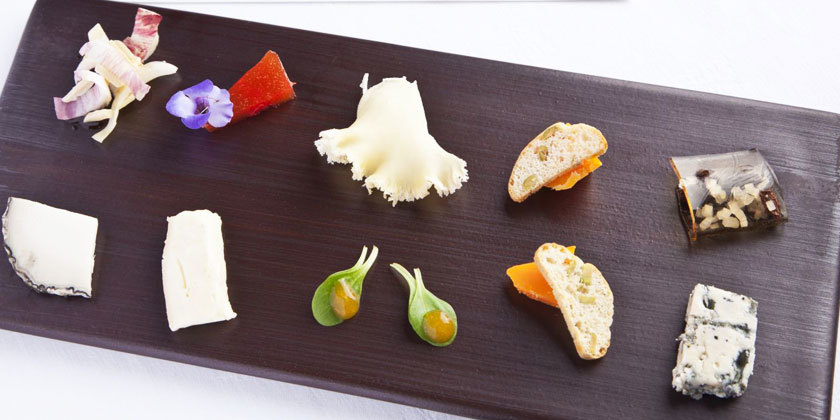 Born Kamakura, 1979.
Started working in French cuisine after university. Moved to France in 2003, and trained for around four years mainly in Southern France and Alpine regions. Started at restaurants in Montpellier before training at Troisgros and Maison de Marc Veyrat (now closed).

Returned to Japan in 2007 to work as chef at Sacré-Coeur and Cedo before beginning at Restaurant Sant Pau in 2009. Was made executive chef in March 2011. 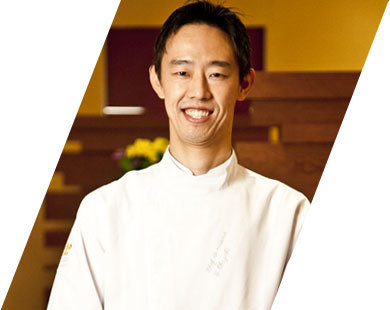 What made you want to become a chef?
I got into it when I studied French in university. At first, I was just a little bit interested, but studying abroad in France really made it a place I could relate it.

I'd worked in a local French restaurant since I was a student, but then I started getting more and more interested, and once I graduated university I decided that was what I wanted to do.

What was the most difficult thing you've ever done?
Lots of things were difficult when I first started. I was surrounded by culinary school graduates and I just didn't have the skills I needed.

When I went to France, the technical side was still difficult, but I had the advantage when it came to the language. That helped make it easier to communicate.

What is good about the food at Sant Pau?
I trained in French cuisine, so when I started I knew I would have to learn the local dishes and the cooking traditions. However, the recipes that Chef Carme made for the restaurant in San Paul del Mar are really free, and there's nothing fancy or eccentric about them. But they are very imaginative and I get so much inspiration from them.

We have to maintain the philosophy of the original, but at the same time, I think we have to keep evolving, too.