Progressive French cuisine that is constantly striving for the new 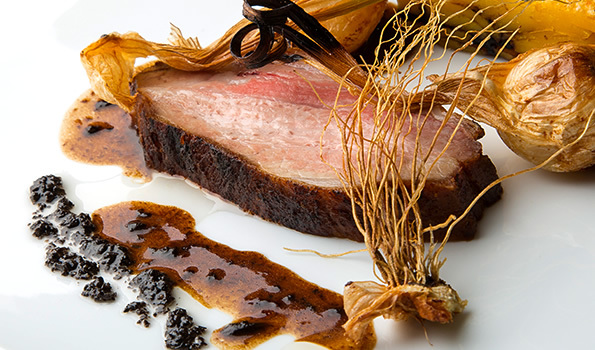 Progressive French cuisine
that is constantly striving for the new 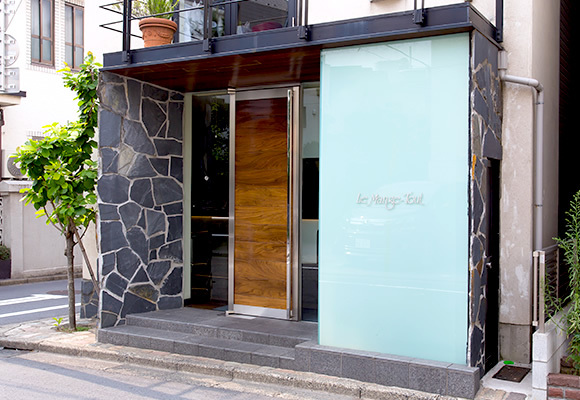 Le Mange-Tout is a freestanding restaurant nestled in a quiet residential area of Kagurazaka.

The restaurant only seats 14 diners, but gourmets gather from all over the country seeking out the proficient skills of Chef Noboru Tani. 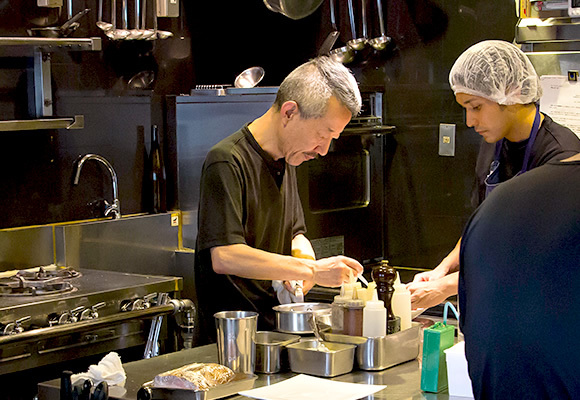 Tani has trained at some of the most famous restaurants in France, including "Au Crocodile" and "Schillinger".
Even with such a successful career under his belt, he has not lost the drive to challenge himself even further.

He says "When I was young, people thought of French cuisine as something classical. But, rather than trying to stubbornly preserve it, I want to turn it into something new." 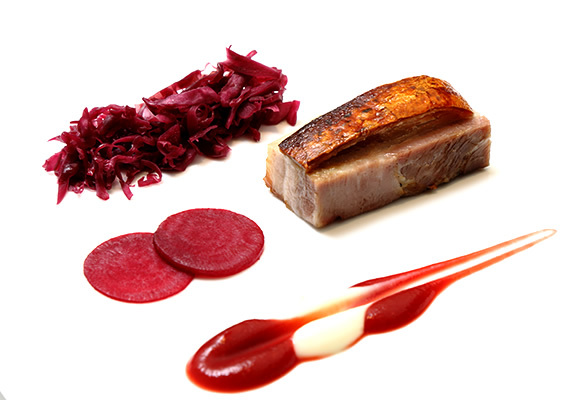 This notion of flexibility is incorporated into every single portion. For example, the Ryukyu pork used in one particular dish takes its inspiration from Cantonese cuisine: it is roasted until the skin is charred and crispy to seal in the flavor of the meat.

"Despite the effort that was put into each dish, such as pickling the pork in salt for a week, the dishes are presented in a modest way. The dish's appearance does not give away that effort.
In reality, an amazing amount of work goes into it. I love to create dishes that are more than meets the eye," says Tani. 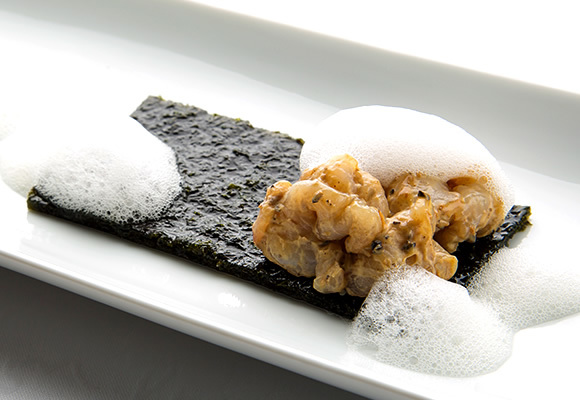 This spirit, that may be called French-style sophistication, is prodigious. Of course, fans of this restaurant fall in love with these kinds of surprises that cannot be experienced anywhere else.

Hidden surprises in every dish. 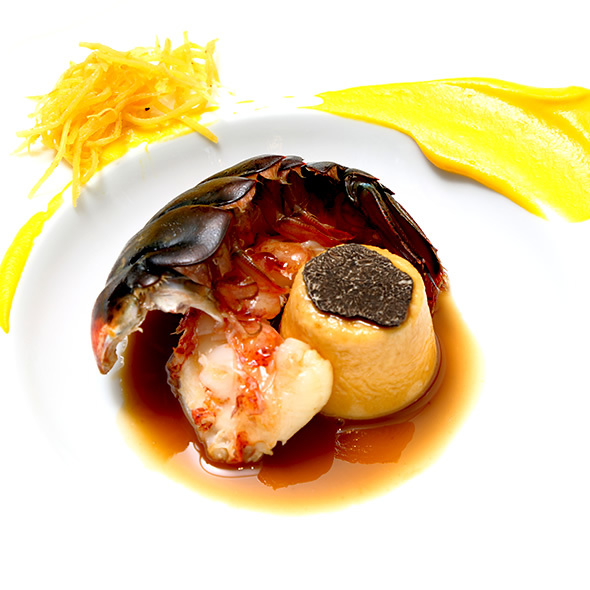 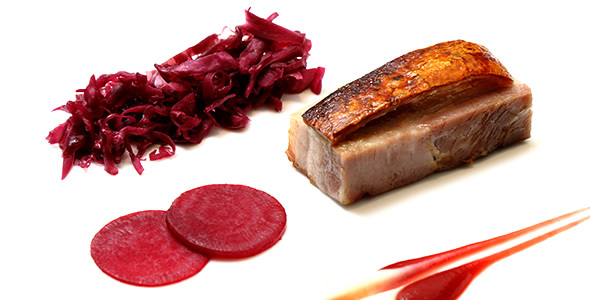 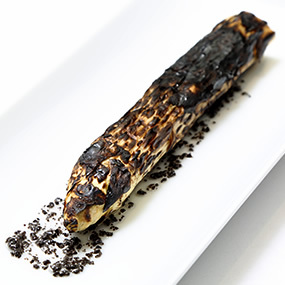 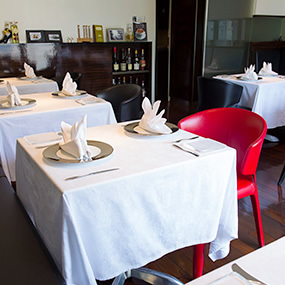 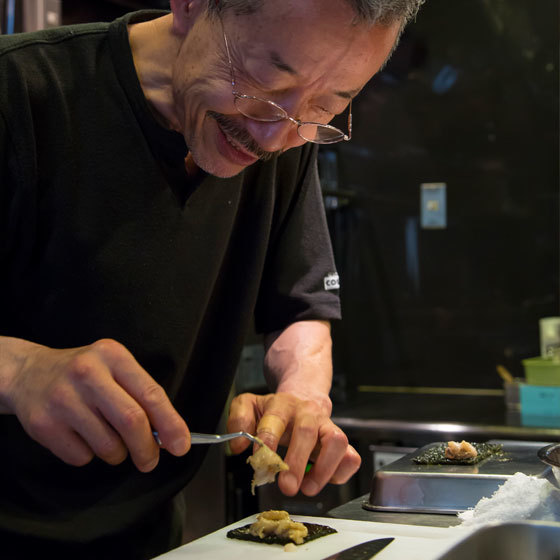 After his apprenticeship at Roppongi's "Ile de France", Chef Noboru Tani went to France. Whilst there, he honed his skills at famous restaurants such as "Au Crocodile" and "Schillinger". On returning to Japan, Noboru served as chef at "Aux Six Arbes" in Roppongi. In 1994, he opened "Le Mange-Tout". 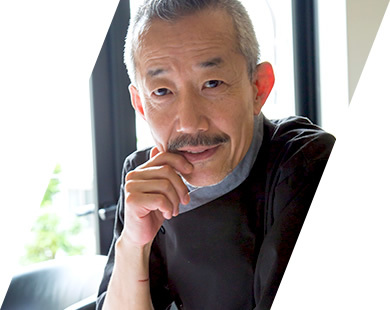 Why did you choose Le Mange­-Tout as the name of your restaurant?
Well, not many know this, but I wasn’t actually the one who came up with the name, Le Mange-Tout. I took the restaurant over from an acquaintance in 1994, when I was still working as chef at Aux Six Arbes.

But,Le Mange-Tout was not doing well back then, thus I started putting on the chef's hat in 1996, while being in a management position. This is something only few people know, although I didn't mean to hide it.

How would you want your customers to enjoy their dining?
I think who(m) you're dining with matters the most. Our dishes are there to support you for enjoying the conversation with him/her. I feel that people are nowadays more focused on dishes served, rather than conversations over the dishes.

I hope our customers enjoy their conversations so much that they can only remember what they talked, saying "By the way, what did we eat?"

What made you want to become a chef?
My dad was a career soldier, and he was very strict and very scary. He came up to me one day when I was in my last year of high school,and said, "What exactly do you want to do in the future?" To be honest, I hadn’t even thought about it yet, but I couldn't tell him that.

That’s when I remembered that my friend had talked about being a chef a few days, and I blurted out, "I want to be a chef!" The next day, I found an application form for a cooking school on my desk (laughs).