Real French cuisine from a chef who values great ingredients 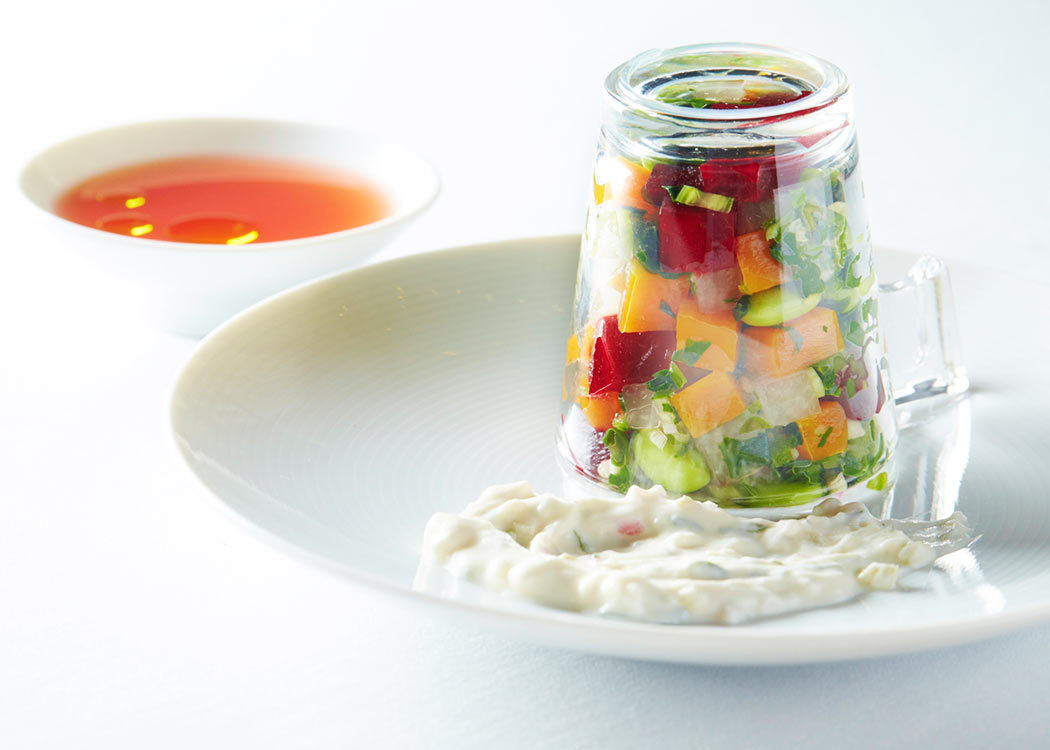 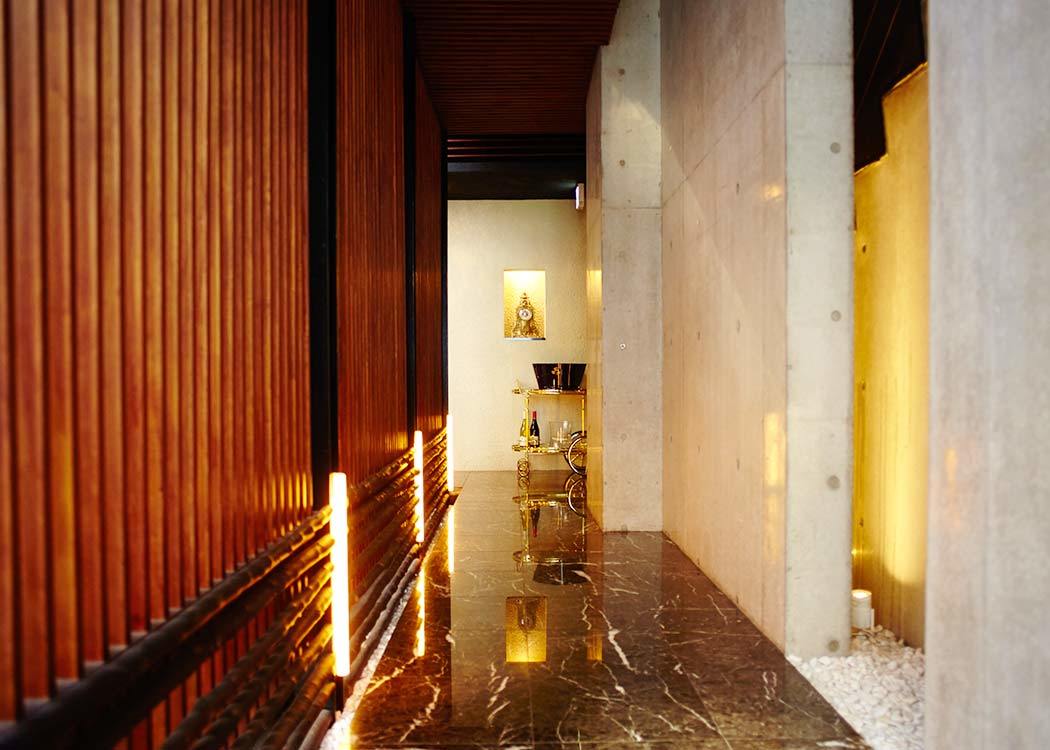 Dishes made from the gifts of the Earth,
French cuisine like no other from a legendary chef. 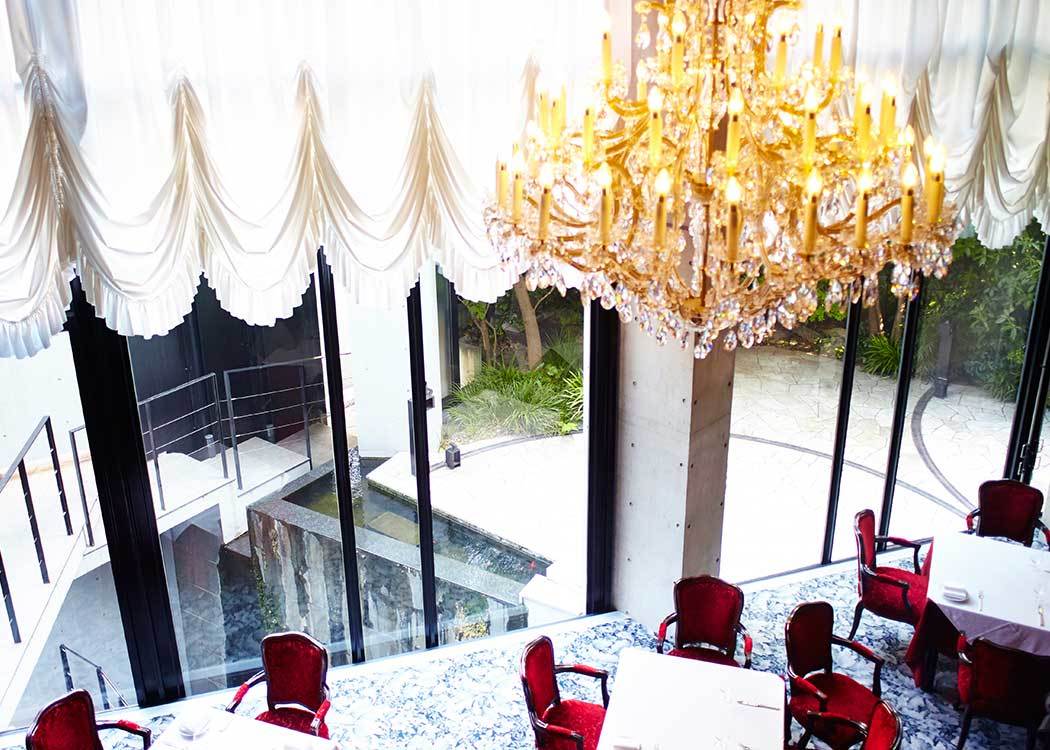 In the quiet streets of Nishi-Azabu sits on little French restaurant that is becoming the talk of Tokyo. Make your way up to the door through an area decorated with a water and plant theme, where you will find the best in dining comfort with the fresh green of the garden just outside the windows.

Czech-made chandeliers glitter from the ceiling high above the floor, raising your expectations for the coming meal. 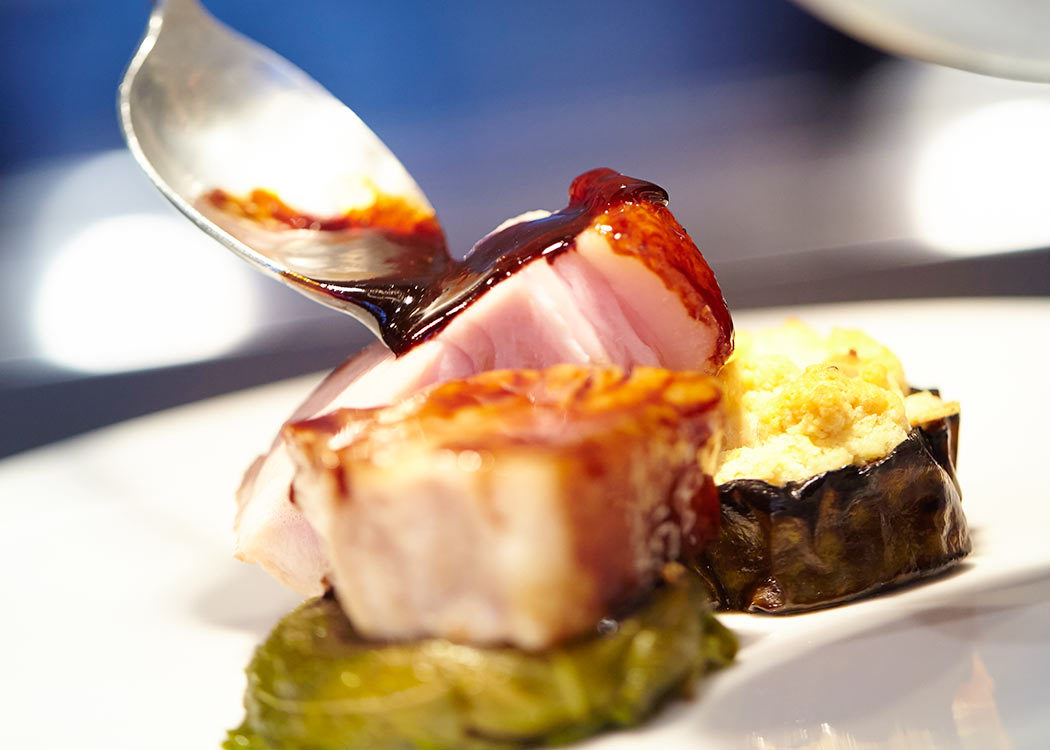 Chef Nobuyuki Shinya trained under the famous three-star Pierre Gagnaire, a man known as the Picasso of French cuisine.

A legend in his own right, Shinya is very careful to maintain the traditions of French cuisine, but continues to challenge himself to create new dishes using the spices of the Orient and other techniques. 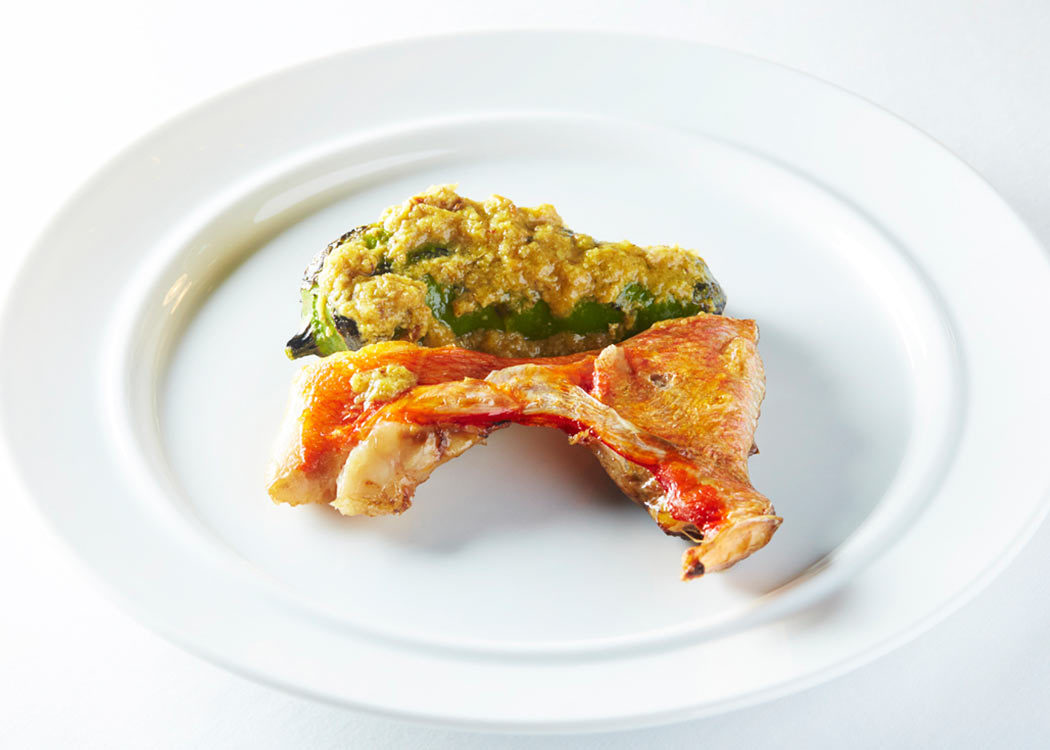 Shinya's course menus are built on a solid foundation. The first part of that foundation is Shinya's natural understanding of how to bring ingredients together, creating dishes with incredible affinity by pairing ingredients with similar textures.

The second part can be seen in the composition of each course, with plates added one by one until the meal is complete.

Immerse yourself in the chef's culinary symphony, enjoying each note of flavour as it is played. 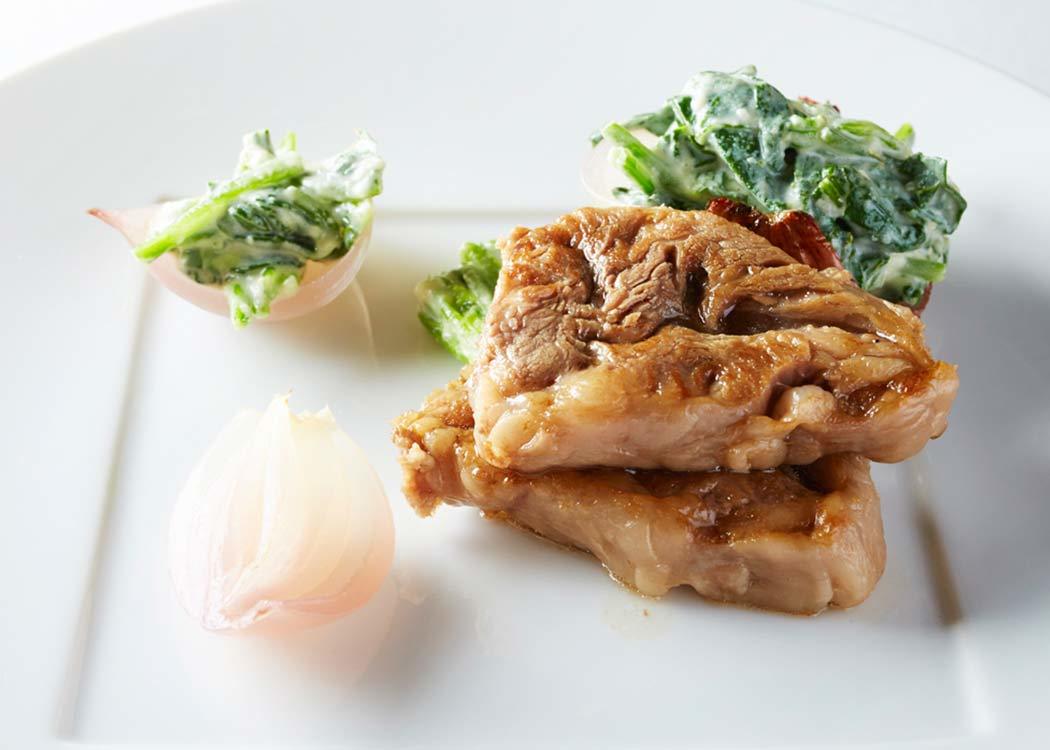 Evenings feature the "Chef's Inspiration" course. Diners can also sit at the chef's table - a perfect place to enjoy a meal with that special someone. 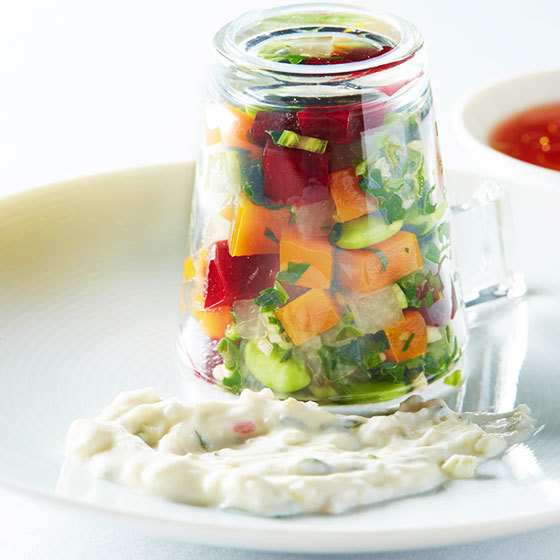 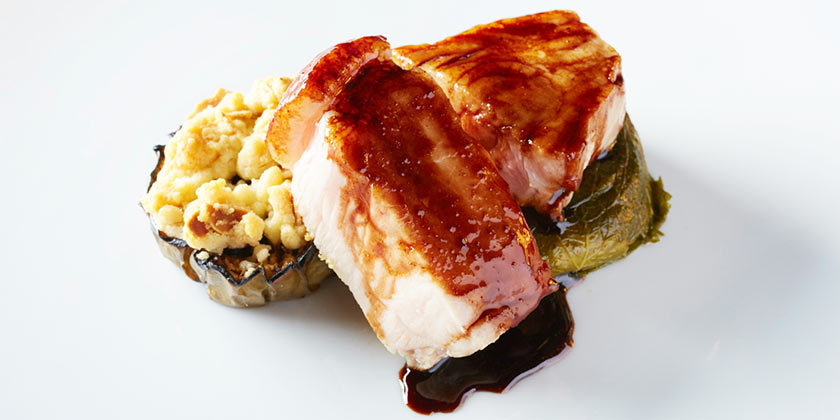 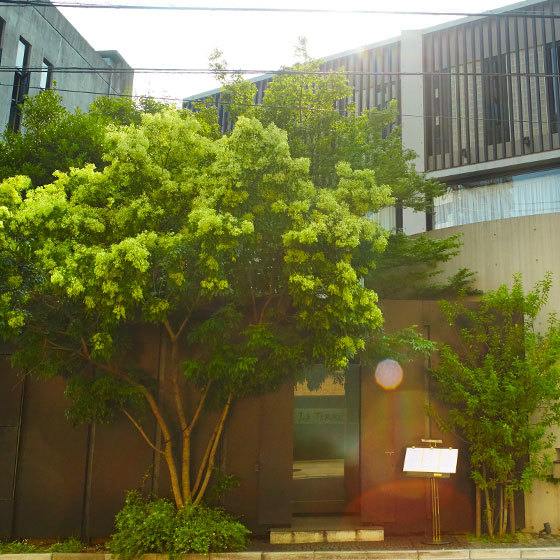 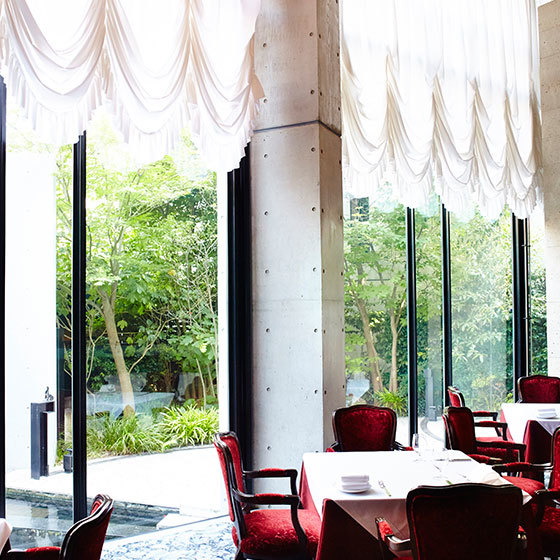 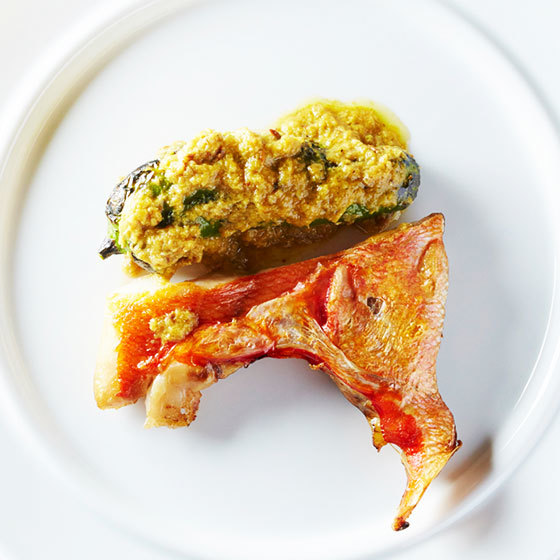 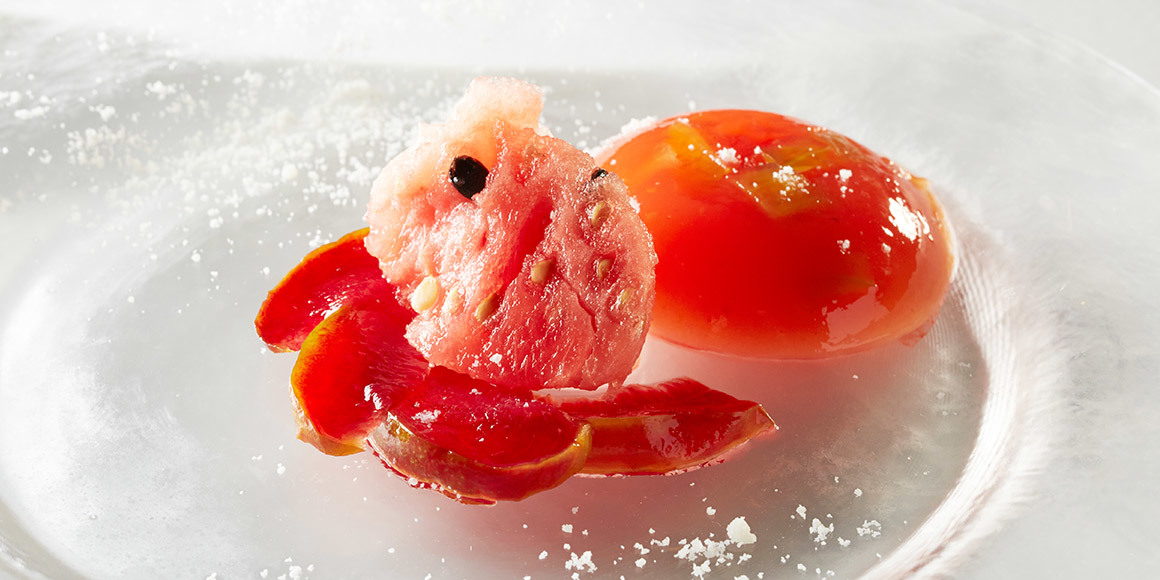 Born in Osaka,1959.
Moved to France after working at French restaurants in Japan and trained under master chef Pierre Gagnaire. Returned to Japan where he became sous chef at Aux Baccanales in Tokyo, then chef at Blue Note Tokyo. Opened Cuillere in Nihonbashi, Osaka at the age of 41, and became executive chef at La Terre in 2014. 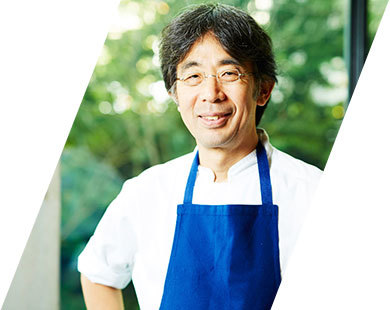 What do you think is important in cooking?
As a chef, I have to be able to cook in any situation. It sounds obvious, but you always have to be conscious of what's around you.

When I'm training chefs, I try to clearly teach them the true essence of cooking so they are able to cook with the minimum amount of equipment and ingredients. It's important to be careful to avoid work that is unnecessary.

Have any of your experiences been useful in your work?
When I trained under Pierre Gagnaire, we had to change the recipes every day, but that was a part of learning real French cuisine. If you have the basic foundation, you can apply it in many ways.

Of course, I also had study French when I wasn't working or sleeping. That experience has helped me too. If you didn't know French, the people who started at the same time as me would end up much farther ahead. I have a very rebellious nature, and I hate to lose.

Born in Tokyo,1976.
Learned the basics of hospitality at Hotel Okura Tokyo before moving to Sydney to work at the Sheraton Hotel. Has managed a number of famous restaurants since returning to Japan, and became manager at La Terre in 2014. 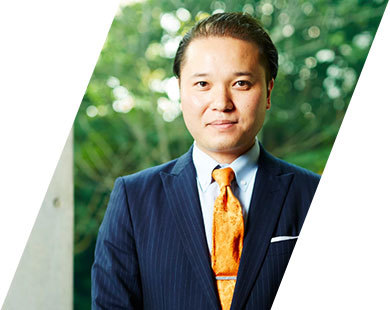 What do you try to do when providing service to customers?
I try to never say no. For example, if it's someone's birthday and they want a wine from the year they were born, many restaurants may find it difficult to accommodate that request. But for us, we try to make every effort to make the customer happy.

Do you have any stories of services you've offered?
I remember one couple that seemed like they were just starting to get to know each other. We set the mood for them with a private room, rose petals scattered around, and candles. They were very happy. I always aim to give the customers more than they ever could expect.