The Master of Seasonal Flavour 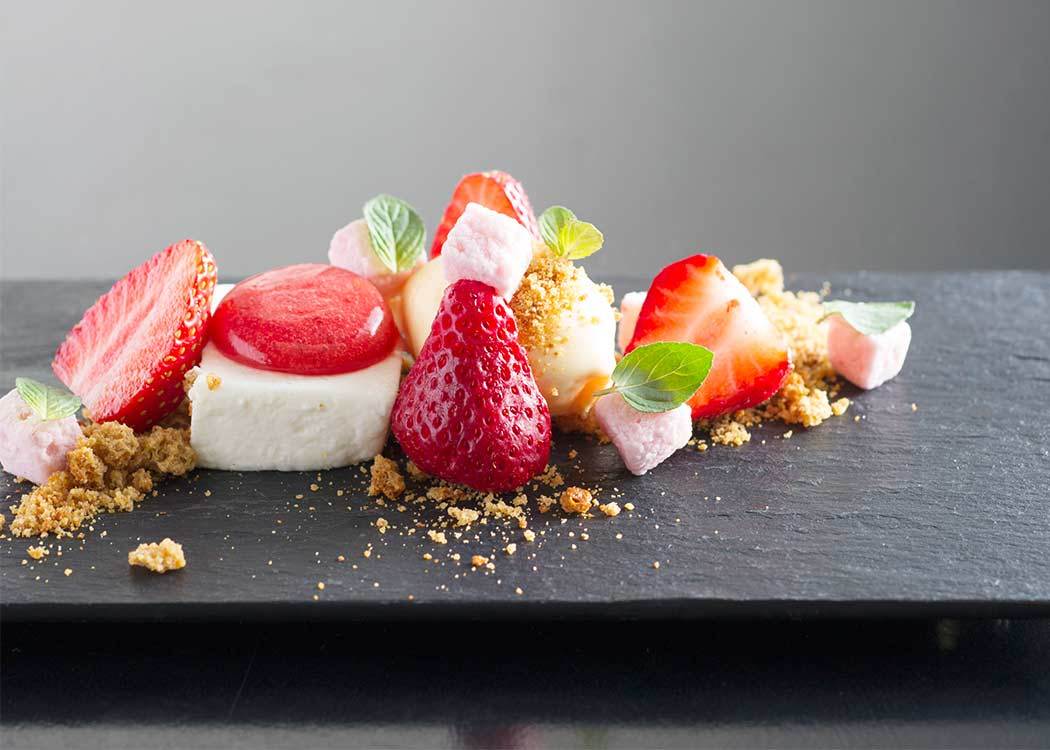 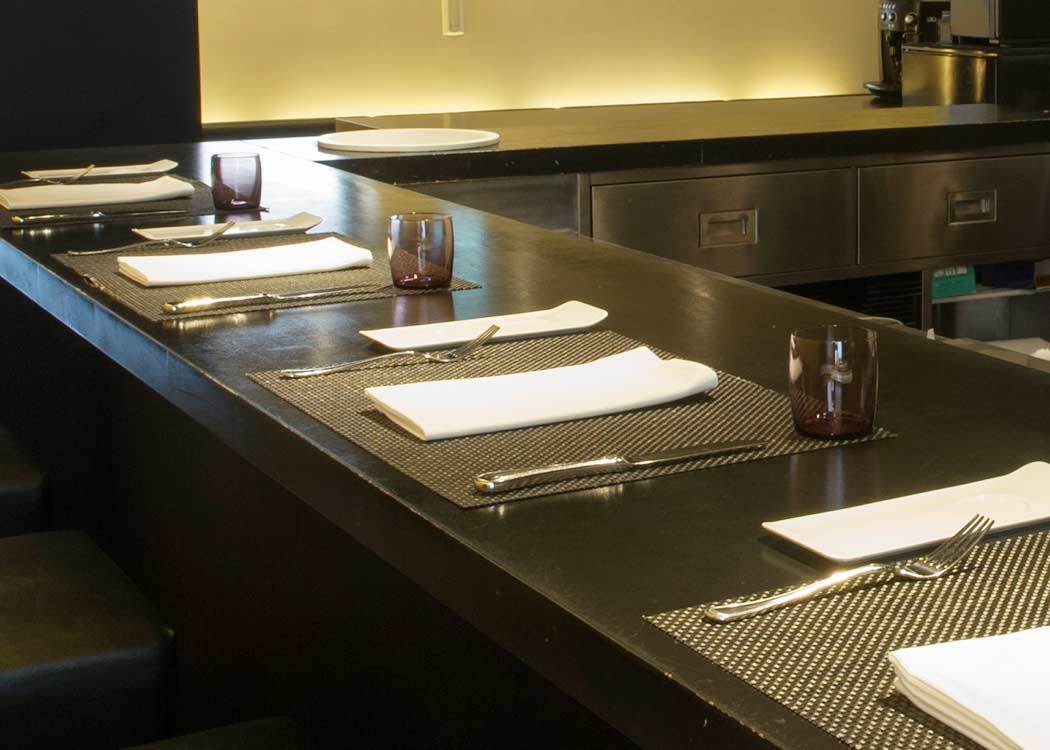 In a quiet corner of Naka-Meguro is a restaurant
dedicated to those who know true quality.

This chef uses his incredible skill
to create a seasonal symphony of flavour. 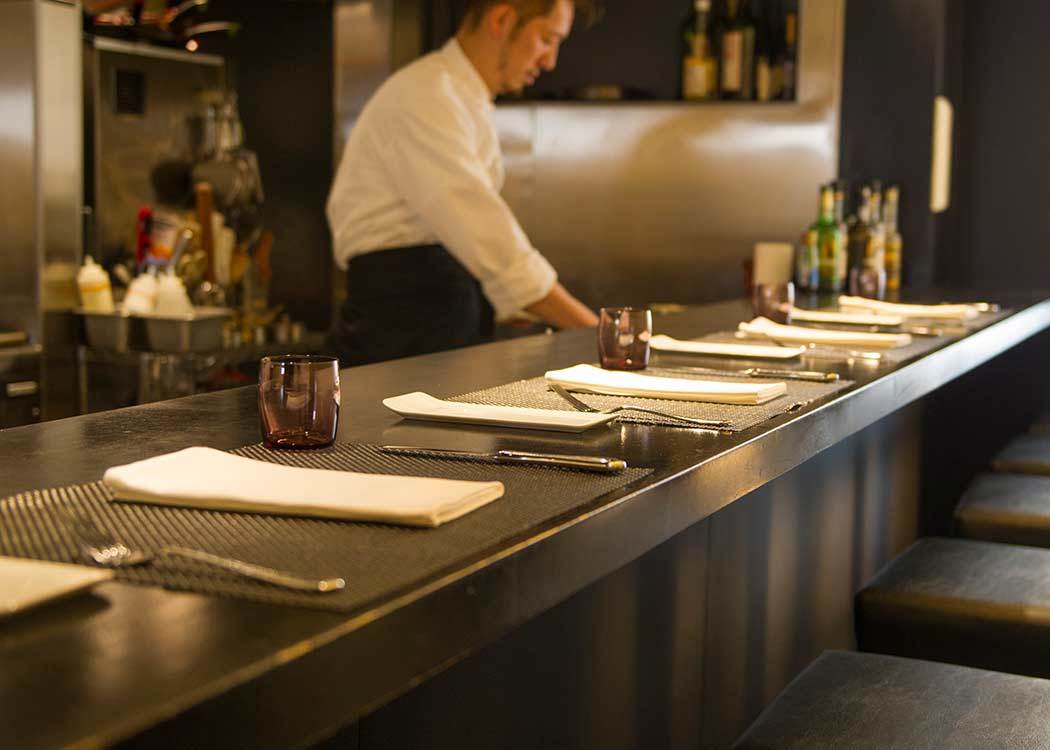 The "Ura-Nakame" area is around a seven-minute walk from Naka-Meguro, far from the bustle of the station, and there we find a French restaurant called SouRiRe. It's not easy to find, but this little spot hidden in the middle of a residential area is worth the search.

The restaurant is located on the second floor of a stylish-looking building, and boasts an almost mono-chromatic interior design that produces a chic, adult atmosphere. The white plastered walls simple add to the warm ambience. 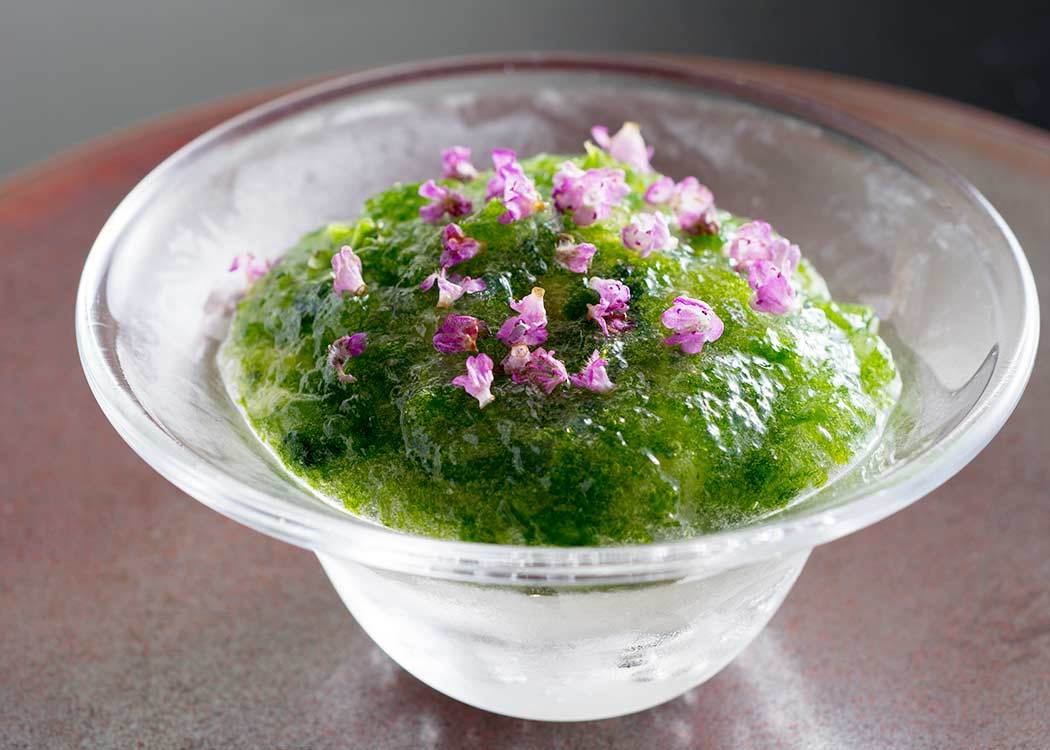 Owner and Chef Takahiro Yuzawa has loved cooking since childhood, and he is a French chef down to the bones. He is relentless in his pursuit of becoming a "great chef" in his own eyes.

"Flavour is determined by the balance of aroma, temperature and texture. That is what creates delicious food."

He doesn't just think about whether a dish is hot or cold; he even considers how the aroma will change as the temperature changes. By bringing out the true essence of his ingredients, he captures their individuality and flavour. 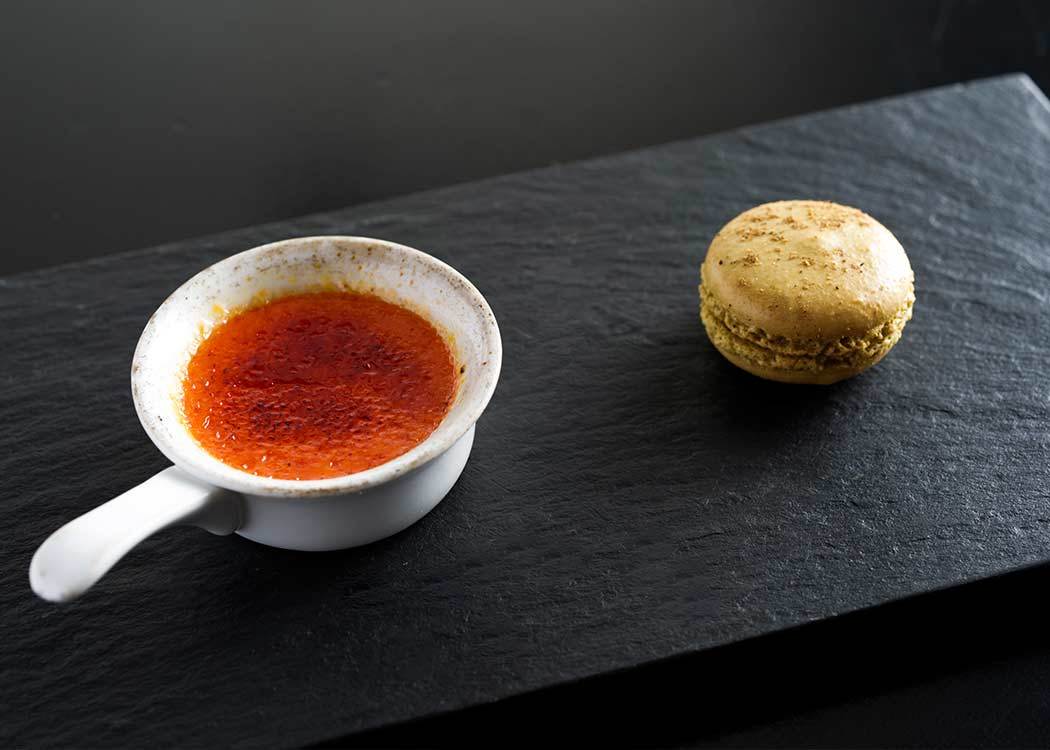 Guests dine upon the "chef's select" courses designed to reflect the soul of each season. Yuzawa uses only those ingredients that meet his strict standards, and periodically introduces new ideas to the courses.

One example is his "fruit & tomato crème brûlée with unripe peppercorn and foie gras macaroon." At first it looks like dessert, but it is in fact an amuse-bouche.

The texture and the complex tart yet spicy flavour expand within the mouth to create a fascinating harmony that goes beyond description. 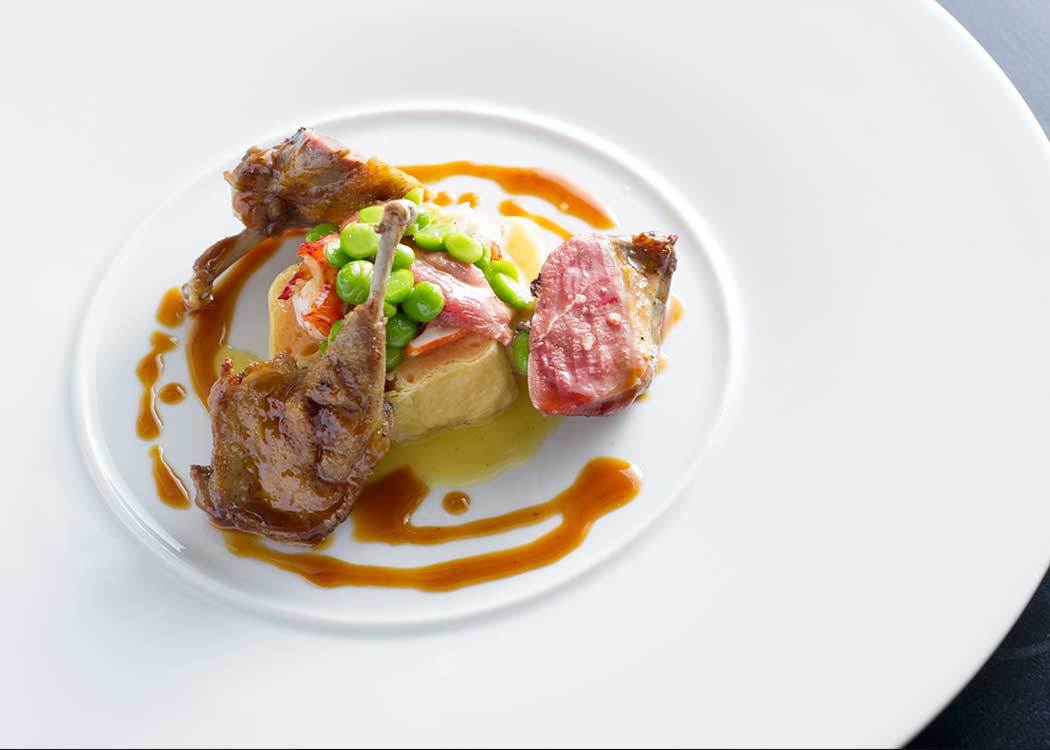 His wines were also selected to match his own sensibility. "Wines I like are naturally going to pair well with the food I make," he says. He looks for quality, without regard to a particular label or region.

The restaurant is lit with soft, ambient lighting, and within that space, Yuzawa's creations always exceed guest expectations.

Take a seat at the chef's table, the best seat in the house, and treat your tastebuds to a moment of pure luxury. 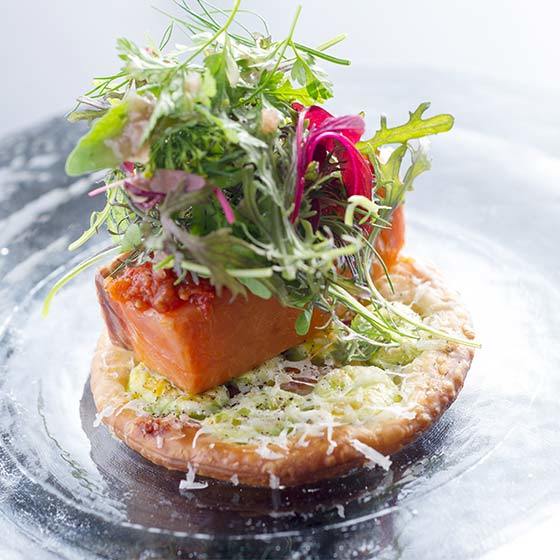 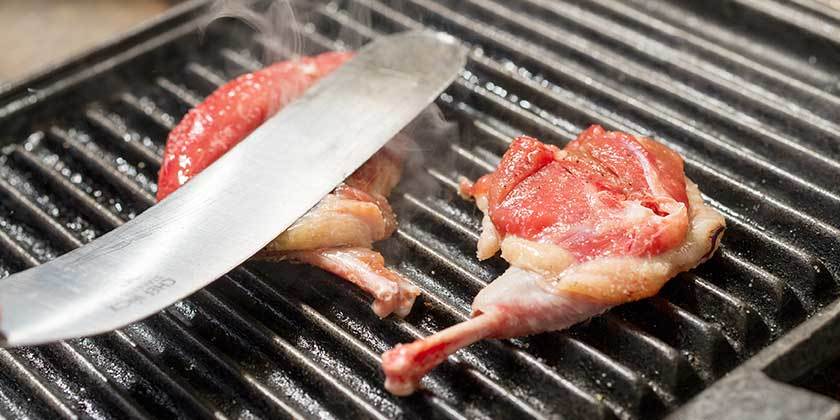 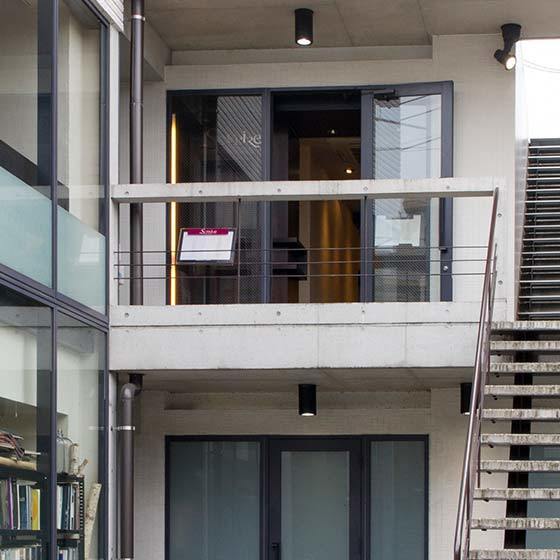 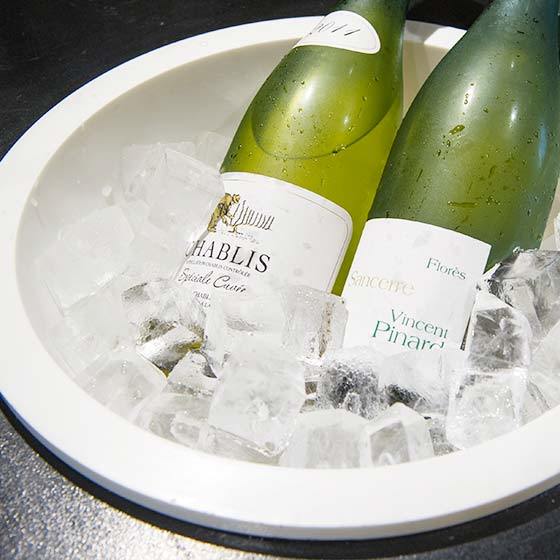 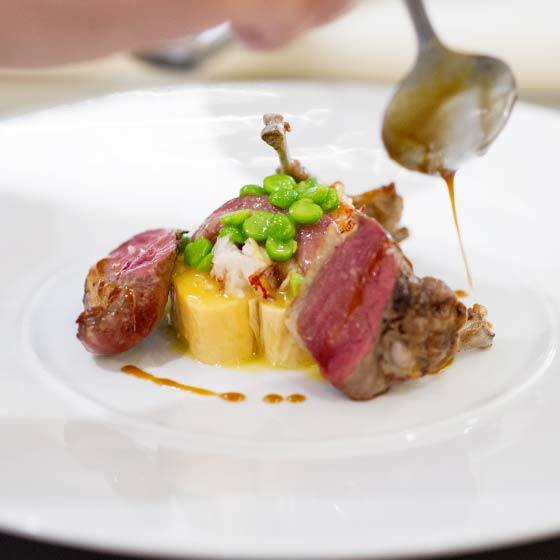 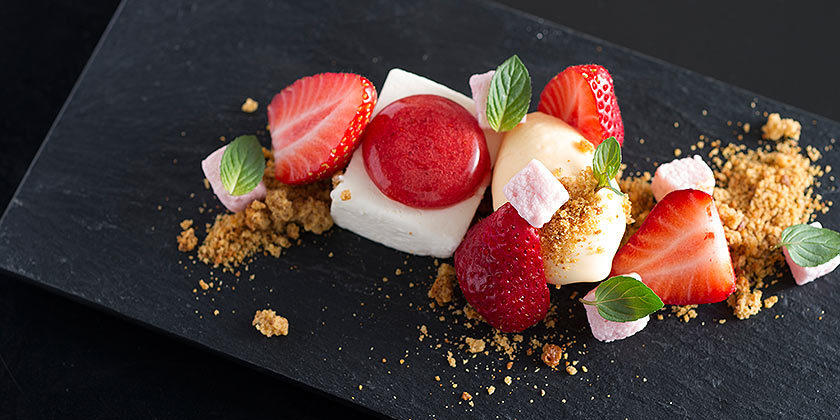 Born in Niigata, 1975.
Has been in love with cooking since young, and attended Niigata Cooking Technical School after high school. While training, his eyes were opened to the world of French cuisine. While working part-time, was introduced to chef Yasuo Igarashi of Ginza's famous Le Manoir D'Hastings, and after graduation from cooking school, began working there.
Learned the basics as a cuisinier, and rose to sous-chef within seven years. Was named chef at sister restaurant L'amphore in 2004.
In April, 2011, realized his dreams with the opening of SouRiRe in Naka-Meguro. 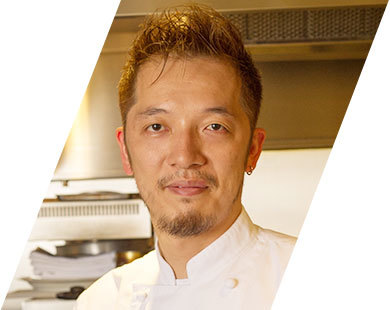 Where does the name of the restaurant come from?
Sourire means "smile, or laugh softly" and my wife chose it. (He laughs.) My wife was a waitress at a Japanese restaurant, and she always had a smile as she carried the food. I figured that if we were smiling here, that would be enough. That would make the customers happy and hopefully bring them back.

I also think a sense of language is important. From the beginning, we were going to have the name in four katakana characters. I mean, it's the name of the restaurant, and it would be easier for people to remember.

How do you choose ingredients?
With fish, I'll never be a match for the pros at Tsukiji, so I depend on them a lot. But in order to become a better judge and to build a relationship with the purchasers, I spent a lot of time and money at Tsukiji Market.

I built some great relationships there, which is why I am able to buy good product. They sometimes even convince me to buy stuff I can't make a profit on. (He laughs.)

What is the greatest thing you've ever tasted?
Chef Igarashi's "conger and pineapple tart" at Le Manoir D'Hastings.

Whenever I go there to eat I leave my meal up to the chef, but with that dish, I get this need to taste it again. I've requested it three times so far.

It's a perfect dish. It's truly wonderful.